What are the Everglades? The National Park and Attractions The Everglades are a subtropical wetland area of about 2 million acres of central and south Florida. The unique ecology is characterized by the effect of the wet and dry seasons on the very flat terrain. In the wet season, the largest lake, Lake Okeechobee, overflows discharging water into a sluggish, shallow river that flows through marshland (sawgrass marsh). In fact, there is so much grass that it is called locally the “river of grass.” The water flows southward, passing through a variety of habitats, including cypress swamps, wet prairie, and mangroves. Eventually, it reaches the Everglades National Park and eventually flows out into Florida Bay.

The Everglades are teeming with plant and animal species not found anywhere else on the planet. This once huge ecosystem has slowly been reduced to a much smaller tract of land that it once covered. But what remains is today encompassed by the Everglades National Park. Read on and find out many more facts about this wonderful place to visit. 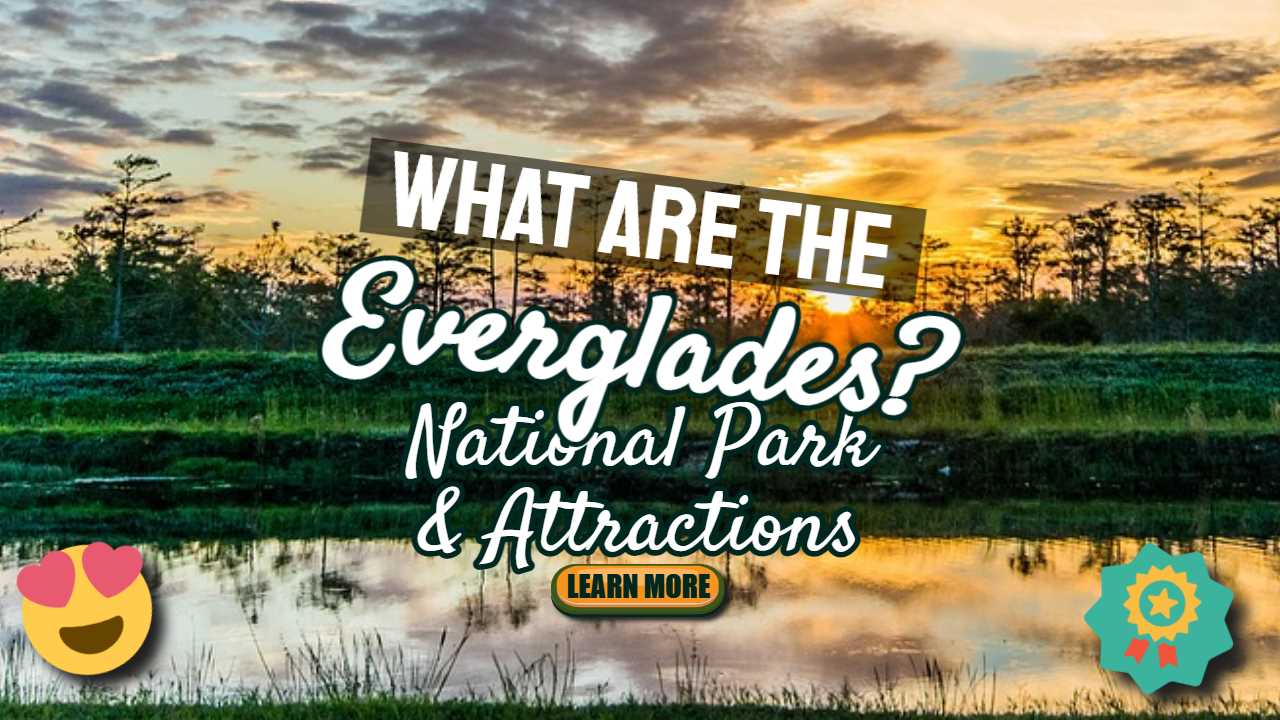 Exploring Florida and the Out-of-this-World Everglades

“Stunning”, “awesome”, “oh, cool!” These are just some of the comments that were uttered by our family before they ever even went there! Just opening the impressive hardcover book; “Light Fading: Reflections on the Imperiled Everglades”, by Joel Curzon, should give you the same reaction as it did us many years ago when we decided to take our first family trip. Joel spent many years exploring and experiencing the Florida Everglades just as we have since. So, give this a few minutes to read and find out what draws so many people to the place.

Exploring the everglades is something out of the ordinary. Seeing it is such a unique ecosystem in this part of the world, seem to blow the minds of many. Yes. Many who visit profess themselves as so much in awe that they describe it as “out of this world”! It’s the habitat of a really impressive cast list of truly exotic wildlife. Also, for anyone interested in fishing the area is as stunningly varied as it can get.

There are many ways to discover Florida’s Everglades for fun, adventure and culture, yes culture! But, just staying with fun and adventure, for now, sit back for a moment and take in the fact that over 34 million visitors each year visit, Orlando alone. It’s the undisputed theme park capital of the world!

But many just enjoy relaxing vacations in South Beach Florida which garners tourists from all around the world. There are just so many reasons as to why swarms of visitors visit South Beach, Florida – or SoBe, as it is commonly known – each year. Resorts at South Beach make a perfect foundation for exploring Florida’s unique beaches. They are an ideal place to stay for people who love to walk or stroll.

Everglades National Park is one of the largest and most well-known of America’s National Parks. It was also the first of America’s parks to be preserved not for its scenic wonders (although these certainly exist) but because of the magnificence of its biological resources.

While the everglades has a history dating back to prehistoric times, the park wasn’t founded until 1947. It is considered the most endangered national park in the USA, as for over 100 years everglades was dredged, dammed, and drained in order to control the ebb and flow of water, which is the lifeblood of the everglades.

Collaborative development of an ecological forecasting model and data manipulation software has been used to show where the most dangers lie to the ecological harmony of the swampland. After many years of exploitation, the park authorities have for more than 10 years been working to repair damage to the Everglades National Park. South Florida Natural Resources Center (SFNRC) is a great place to visit to appreciate the dynamics and fluxes of nutrients along environmental gradients in the Florida Everglades.

Before you make your way to the start of the Florida Keys, we would suggest thinking about including the Everglades National Park in your Florida Keys itinerary. If you wish to visit the Everglades before you hit the keys, just make a turn south from Florida City. The best way to get a taste for the variety of habitats within the Everglades is to drive along the National Park’s main park road, which travels from Homestead to Flamingo and to stop at the short and accessible trails along the way.

10 Fascinating Facts About the Florida Everglades

The novelty of the Monkey Jungle Attraction is that human beings are “caged” on set paths while they observe monkeys playing around in their free habitat. That was the design of the place when an animal behaviourist brought a group of monkeys to the Florida everglades but could not bear to cage them.

At first glance, “biking through shark valley” sounds like some kind of poetic euphemism for walking down south-beach on a Saturday night. But it is, in fact, the odd South Florida scenic bike ride through pristine nature, a 15-mile paved trail through the sawgrass, tropical hardwoods, and deep, black water.

“Seminole Wind” was written by John Anderson, as a tribute to his home state of Florida and the Seminole nation, which can be found in the southern tip near the Everglades National Park. Not only did the popular tune gain a large following among C&W fans in the US, but it is also a global favourite.

A recent problem in the Everglades is the prevalence of pythons! When hurricane Andrew hit south Florida in 1992, it destroyed a warehouse holding a whole bunch of baby pythons and they ended up washed into the everglades, where there was food, humidity, warmth.  That’s all a python needs to thrive, and there are so many now that they have to be controlled.

5. Often First Seen from the Air

The Florida Everglades are often a site first seen from the plane as you prepare to land in Miami or Fort Lauderdale. They’re also an amazing weekend destination. The Everglades is a national park that offers the prime habitat for manatees, crocodiles, and even Florida panthers.

The ecosystems of the Florida Everglades are home to a number of common and unique reptile species. One of the best ways to view the diverse plant life is on an airboat tour. A private airboat tour can be customized to your interests whether, it’s searching for endangered species, bow fishing to reduce the number of invasive fish, or just floating down the river of sawgrass.

I’ll bet many of you reading this had no idea there even was a black vulture. Even avid bird watchers don’t know they exist. We learned of the fact while writing a piece on the birds of prey living in the Florida Everglades.

8. Residents and Visitors Need to Take Care to Learn About Invasive Species

Do you want to visit or even build your home near Florida Everglades? They can be a great choice to live in. However, if you’re new to Florida, you may not be aware of the various invasive species. Make sure that you find out how to be safe when bathing!

Located in Naples, the golf club of the Everglades is a private golf course that closely resembles an open links-style course. At the same time, several of the back fairways are tree-lined. Sculptured bunkers, rolling fairways, expansive lakes with native grasses provide the diversity, challenge and aesthetic appeal of this south Florida course.

Construction of the next major project for the Everglades agricultural area reservoir South of Lake Okeechobee is set to begin in April 2021. This follows the South Florida Water Management District’s award of a $175. 8-million lump-sum construction contract to Phillips and Jordan Inc.

Most of the countries of the world are experiencing problems from alien or invasive species of animals, insects and plants to some degree. But, the problem they currently have in Florida is large, scaly and can swallow an alligator! The area around the Everglades in Florida is currently experiencing an invasion of Burmese pythons!

The invasive animals and plants are not only changing the ecosystem itself but also bring toxic effects to the everglades national park. A study published in 2011 found some mammal populations have dropped over 90% in areas populated by pythons.

Florida’s python problem is threatening to sweep north into the rest of America. But snake hunter Dusty Crum and his crew are ready to take on some of the biggest, deadliest snakes in the everglades. During Florida’swet season’, the high-water acts as a “highway” for predators – including the Burmese python – and it’s up to Dusty to catch them before they wipe out an entire generation of mammals.

Stop to Enjoy These Everglades Attractions

Wooten’s is your one-stop destination for a complete everglades adventure! Before or after your airboat ride, you can also visit our animal sanctuary & alligator park where we put on live alligator shows. Or soak up some nature and try to spot manatees on our swamp buggy tour. It’s good to stop and remember what they are working so hard to protect. Here’s your dose of Everglades animal immersion. In hot November to March, keep your eyes peeled for the pink!

For a popular, family-friendly adventure from Fort Lauderdale, consider the “Everglades VIP Tour”, which includes comfortable, round-trip transportation from your hotel. Begin with a thrilling hour-long airboat ride through the everglades for bird watching and gator spotting while learning about the area from a knowledgeable captain before taking your seat at the “gator pit” for an exciting performance.

It’s not all about the outdoor recreation here. Driving along roads like the Tamiami trail takes you past hidden gems that are worth a visit. For example, stop at Clyde Butcher’s Big Cypress Gallery to view dramatic black-and-white photos of the Everglades.

The most important climatic feature is also the most important natural disturbance factor: the recurrent hurricanes that strike most frequently from August through October. Apart from avoiding the hurricane season, the climate is good for most of the rest of the year.

Where do you camp during your visit to Florida? We stay at the Flamingo Campground when we were in the Everglades. On the Keys, we stayed at a private campground on Key Largo and explored from there.

The best spring in Florida for photography lovers is undoubtedly Juniper Springs State Park. The spring is absolutely picturesque and takes stunning photography, perfect for Instagram. Juniper Springs is located right inside Ocala national forest, one of the most popular areas for springs in Florida.

The Article What are the Everglades? The National Park and Attractions First Appeared ON
: https://gqcentral.co.uk